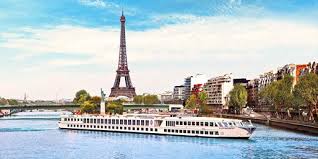 Q – We have planned a cruise next year on AMA that will take in Provence and Spain for two weeks between Paris and Barcelona. We are excited but worried now about more terrorist acts against France. We’re not that well traveled and we are wondering if we should go and whether or not we should take out a special kind of insurance in case we get cold feet. Our Pastor has suggested that we not go so we are weighing that heavily.

A – We’ve received a wide range of questions on this topic. So here are three things to think about if future acts of terrorism are a concern as you look ahead to a vacation in Europe.

01 – Due the large number of American men who are insecure with some aspect of their genitalia, many of us find the need to carry a substitute in the form of a gun. That results in the highest murder rate in the industrialized world. It also means that we have more people in prison than any other nation on earth. And sometimes, when these prisoners are allowed out, they are even more violent than when they went in. All of which is to suggest that no place you will visit in Europe has the murder rate we have in the US, and, even with the current number of terrorist acts, you are generally  safer traveling ion Europe than you are remaining here in the States. Sorry, but those are the facts.

02 – You would be making a mistake if you try to guess where lone terrorists or something planned by ISIS will strike. The fact is that no one knows. What we do know is that their goal is to unleash attacks where crowds gather in the States. Their goal is to make us all afraid. They won’t succeed. We are moving as many of our overseas meetings as possible to Paris next year as a show of support, Many travelers are changing their travel plans to include time in France. There are, quite frankly, some destinations that give us concern based on the security reports that we read. The two areas of most concern to our staff currently are East Africa and the United States.

03 – You should take out “Cancel for Any Reason” insurance. This means that up until two days prior to your departure, you can cancel your cruise for a full refund in the form of cash or a future credit. AMA offers that coverage. You should also know that AMA rates highly in our evaluations for any number of reasons not the least of which is approachable management with an understanding of long-term guest satisfaction. In the aftermath of the Paris attacks there were a number of cancellations and those guests scheduled to sail on the sailings following the attacks were offered a $100% future cruise credit.

Sorry to disagree with your Pastor. We trust he is well traveled and up-to-date on matters of international security. By the way, what does your mailman think about your future travels?